Small Soldiers is a third-person action game released at the same time as the movie of the same name. Instead of dealing with the toy Commandos and Gorgonites from the movie, the game uses the characters in an imaginary environment as described on the back of the toy figures' packaging. It has fourteen levels of single-player action some featuring the Gorgonite Archer, others featuring the commando Chip Hazard. You assume the role of Archer, who has to defend his world against an invasion of the commandos. You can run, jump, climb ledges and fight using a blaster. Many levels involve freeing captured Gorgonites who then help you fight. Multiplayer includes two head-to-head two-player Chip vs. Archer mode where you either need to capture flags or get a set amount of frags. 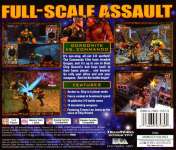 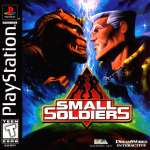