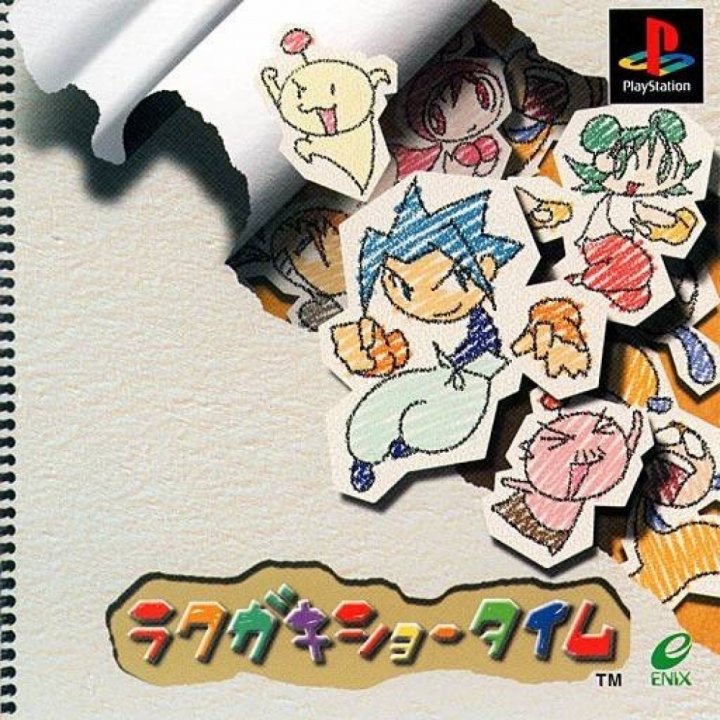 Rakugaki Showtime is a game along the same vein as Poitter's Point (Also known as Poy Poy )where in you try to defeat the opponents by throwing things at them. STORY: Welcome to the world of Rakugaki. An imaginary game world, created entirely by the pencil drawings of the "God Hand". The characters who inhabit this world were created by the God Hand in the same way... Yukiwo, Sasami, Pitanand Tsubohachi; the four members of the "Heroes Team", and Daddy; who commands the mysterious enemy character army. Called the "Heroes and Enemies", they are all controlled by their master, and follow their predetermined (created?) fate. Today a battle to the end unfolds... GAMEPLAY: Rakugaki Showtime you play as a rakugaki (scribble) character, who must fight against other rakugaki characters in a square 3D arena. The fights mainly consist of throwing items at the opposition. However, throwing is not as simple as "pick up, aim & throw". In Rakugaki Showtime different "drives" can be placed on the thrown items by holding different directions whilst throwing. Holding the direction towards the target will cause a "Forward Drive Throw", which is like a faster normal throw, albeit weaker. Holding the direction away from the target will cause you to do a "Backward Drive Throw", which will cause your character to throw the item slower and in an arc, but it will cause far more damage. By performing a "Counter", you are able to block most items thrown at you. If your timing is off, the Item will just bounce off you and drop down. But if you "Counter" just before the item hits you, your character will perform a "Donpisha Counter" (Donpisha means to trigger immediately), which causes the item to be reflected back at the original thrower. One of the more important items in the game is a Smiley Ball. Unlike all other items, Smiley Balls will not be destroyed after use. Instead, every impact will slowly make the Smiley Ball go from yellow to magenta, from happy to angry. After it gets very angry, a sound clip of "halleluja" will play and the Smiley will be engulfed in flashing white light... it has become a Super Smiley. When you pick up a Super Smiley, you will not throw it. Instead, your rakugaki will unleash their "Super Smiley Attack", which in most cases is devestating. Also, your fighter may be able to use different Super Smiley Attack's by applying different drives, these are called Forward Super Smileys and the Backward Drive Super Smileys. Like every other fighting game that has ever existed, you can execute Special Moves. These usually consist of very basic button commands involving the directional buttons and generally the Circle button. Some characters have a whole arsenal of Special Moves, others only have only a handful. Around the stages are "Item Points", these are where the God Hand will draw the Items to be used in battle. You can make your character move to these points quickly by performing a "Homing Dash". To do this, jump, hold the direction you want to go and then hit the jump button again. You will fly over to the point you indicated. As well as item points, you can use a "Homing Dash" to quickly fly over to Smiley Balls, this is EXTREMELY helpful. You are also able to "Chain Homing Dashes", to do this, just hold the jump button down after doing a Homing Dash, and tap the direction of another item point before you land. You can cancel Homing Dashes mid-flight by pressing the Circle Button. GAME MODES: - Normal Mode: In this mode, you battle enemies in set stages. The difficulty differs depending on your performance, where doing badly (i.e. losing two times in arow) nets you crappy characters (e.g. Zacko) whereas doing well rewards youwith really good characters. At first you will only be able to play as Yukiwo, Sasami, Pitan and Tsubohachi, but everytime you complete the game you will unlock another character. There are 12 stages you must battle through, ending with a final rumble against the God Hand. - Versus Mode: In versus mode, you can battle to other three players or computer rtvals. - Training Mode: Here you select a character to fight against a Zacko who has an absurd amount of life and hardly enough brain cells to fill a pore on the human face. This isgood to test out damage for the different moves of your character. The missions are as follows: 1) Use the Smiley Ball 2) Use Items 3) Test your skills. CHARACTERS: - Yukiwo: Yukiwo is the standard well-rounded protagonist. He has an above averageamount of health, at 3928 HP. His running speed is Fairly Fast, and his Homing Dash speed is pretty Average. - Sasami: Sasami is a very agile fighter.she's skilled in the Kung Fu Arts. Both her running and Homing Dash speeds are Fast, which will allow her to run rings against most of the opposition. She is fairly "light-weight" though, only having 2333 HP. She only has a couple of Special Moves, and they are all pretty weak. - Pitan: Pitan is a cute mischievous monk, who speaks in Kansai Ben.. He has 3001 HP, his running speed is Fast,and his Homing Dash speed is Fairly Fast. Apart from being speedy, Pitan's greatest advantage over the others are his highly useful Super Smiley Attacks. - Tsubohachi: Tsubohachi is Pitan's unruly drunk of a father. He is constantly referred to as "OYAJI", which is somewhat Japanese slang for "My Old Man", "Geezer", etc. Tsubohachi is one of the most enjoyable characters to play as. Whilst your controlling him, he won'tfollow your commands 100% correctly, which gives you the feeling of playing as a drunk. It's a brilliant touch to this character. Tsubohachi has a very decent amount of health, at 4802 HP, and his running and Homing Dash speed are both very random. Relying on whether your pushing against or with the way he's staggering. 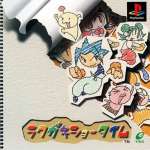 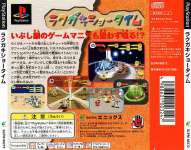 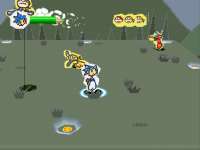 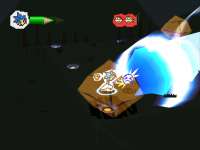