This game is the first volume of a series of compilations of MSX computer games released by Konami only in Japan. It was also released on the Sega Saturn. This compilation includes the classic games: - Konami's Boxing (1984): A boxing game with a couple of moves, with the standard jabs complimented by body punches and the ability to dodge, duck or raise your guard. Each punch weakens your opponent's strength, although going long enough without being hit can see this begin to recover. A rain of blows can produce a quick knockout, but in general you must hit him many times, and then with a knockout blow, to see him go down. There is a referee. The game has a two player option. - Konami's Ping-Pong (1985): From Konami's coin-op, Ping Pong recreates the fast-paced sport of table tennis. To win each match you must get to 10 points with a 2 point lead - if the scores reach 10-9 the game goes on until someone has a 2 point lead or reaches 15, in a similar manner to tennis. There are nine skill levels to beat, with increasing abilities as the game goes on. The human player has the advantage of serving first, and as the serve reverses every five points, you are guaranteed to have more chances to serve than your opponent (remember the significance of 10 and 15 in the scoring). The points system rewards long rallies and large winning margins, as you get points for each hit, for each point won, and for each point of the winning margin. - Hyper Sports 2 (1985): Three tough events await in this joystick-waggling action game. The full sequence of events is - skeet shooting, archery and weightlifting. You must complete each event in order to be allowed onto the next one. - Mopiranger (1985): The peaceful land of the Mopira have been invaded by the Razons. In this platform game you 'll play Mopiranger and you have to save the young Moplits, who have been kidnapped by the dastardly Razons. The levels are build in a maze-like pattern in which you have to find and rescue the young Moplits from the hostile Razons. Using the obstacles present in the game you can block the Razons, but also lock yourself in... - Antarctic Adventure (1984): As a penguin, you must travel around Antarctica, making your way between bases before time runs out. This sounds easy, right? Wrong. Hindering your progress will be ice crevices and leopard seals. You can jump over the crevices, but jumping over the leopard seals may be difficult. You can speed up or slow down the penguin to avoid both of these hazards. The bases include Australia, France, New Zealand, USA, Argentina, UK, and Japan. You can collect flags and eat fish for points. Collecting a flashing flag will allow you to wear a propeller that enable you to fly over those hazards. - Yie Ar Kung-Fu (1984): Based on the popular arcade game, Yie Ar Kung-Fu follows Oolong's quest to become a Kung-Fu master. Of course this involves fighting a wide range of opponents in a traditional one-on-one 2D environment. Oolong has a wide range of attacks he can use to lower his opponent's life bar, including traditional punching and kicking attacks as well as jumping ones. Opponents are well armed with unique weapons and attacks, so Oolong's task won't be easy. - Road Fighter (1985): A top view racing game. You have to reach the finish line before time runs out. Don't crash into the wall, cars or trucks. Because if you do you will lose gasoline. You can get additional gasoline by picking up fuel items. Especially avoid the purple cars, they do change lanes! And remember... oil makes road slippery... - Sky Jaguar (1984): Vertical shooter. When a weakened and vulnerable Earth is invaded by the vicious Zephyr army, the planet's only hope is a fleet of powerful ships, the Sky Jaguars. It 'll take sharp reflexes and amazing skills to survive the Zephyrians' unrelenting assault... can you last long enough to discover and destroy the enemy's hidden headquarters? - Gradius (1986): The people of Gradius are in trouble. The ameoboid Bacterions have launched an all out attack against the planet, and it's up to you to fly into battle and save them. Along the way you'll be able to power up your ship with hyper speed, force fields, lasers, missiles, double beam cannons and more to help you battle. Based on the arcade game, Gradius is a side scrolling shooter. Shooting certain enemies will leave a power up pod behind which can be collected to add more power to your ship. Each level features a wide variety of enemies trying to stop you, with a large boss at the end. Gameplay is for one player or two players alternating. - Gofer no Yabou: Episode 2 (1988): Also known as Nemesis 3 - The Eye Of Destruction. Gradius 3 is a vertical scrolling shoot 'm up. Shooting at certain enemies will leave a power up pod behind which can be collected to add more power to your space ship (for example special weapons or a force field). Every level features a wide variety of enemies trying to stop you, with a large boss at the end. Gameplay is for one player or two players alternating. In Gradius 3 the planet Gradius is involved in 3 space wars: versus Bacterion, Venom and Salamander! 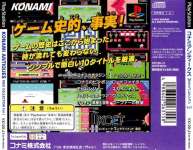