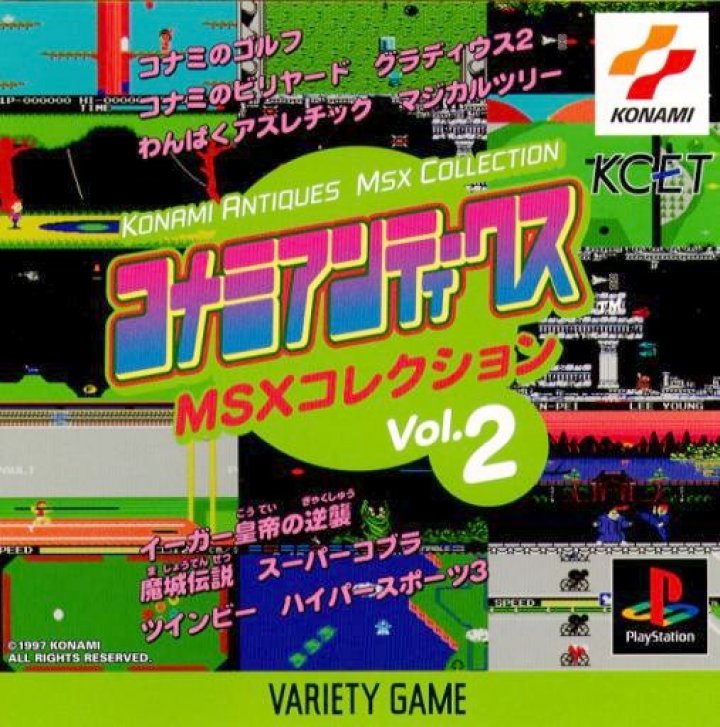 This game is the second volume of a series of compilations of MSX computer games released by Konami only in Japan. It was also released on the Sega Saturn. This compilation includes the classic games: - Konami's Golf (1984): Konami's Golf features a challenging 18 hole course and allows you to choose your club, adjust your stance and control your swing, applying hook and slice if desired (or inadvertently added). Wind and ball lie must be taken into account. The game features a split screen with two views, one an overhead view of the entire hole, and the other a 3-D view from your balls current location. The gameplay options include 1 player stroke play, 2 player stroke play, or 2 player match play. - Konami's Billiards (1983): Billiards is a pool simulations game. Pocket ball, one of the most famous versions of billiards in the world, is now available on your computer screen. Discover the excitement of balls colliding, the silence and concentration of the billiard room. This game has a dual player mode. - Hyper Sports 3 (1985): Four new challenging sports events await in this third and last installment of the Hyper Sports series. The sports to play in this edition are cycling, the triple jump, curling and pole jumping. To continue to the next event you must complete each event within the events qualification criteria. - Athletic Land (1984): You play a child on a metro-cross-like dash across an obstacle course with a time limit. Your physical prowess is tested to the limit as you leap, duck, turn and twist to avoid all hazards. There are several screens with different combinations of obstacles. - Magical Tree (1984): Magical Tree is a platform game where the player's objective is to reach the tree's top, some 2,000 meters above the ground. You play the little indian and you have to avoid several enemies, like bees and owls while climbing towards the top of the tree. Collect fruits and special items as diamonds on your way to the top of the tree. - Yie Ar Kung-Fu II: The Emperor Yie-Gah (1985): Sequel of the popular arcade game, Yie Ar Kung-Fu. It follows Oolong's quest to become a Kung-Fu master. This involves fighting with a wide range of opponents in a traditional one-on-one 2D environment. Oolong has a wide range of attack moves he can use to lower his opponent's life bar, including traditional punching and kicking attacks as well as jumping ones. Opponents are well equipped with unique weapons and attacks. - Knightmare (1986): The game is about brave knight, who shoots with arrows all his enemies and at the end of level their bosses such like witches, etc. Shooting monsters, avoiding obstacles, passing the bridges and collecting upgrades for your weapon leads you to the glory. Digitized music and sound adds more to ordinary arcade gameplay. This game maybe also about two brave knights (you and your friend) who does the same for the victory on one screen. - Super Cobra (1983): Super Cobra is a side scrolling shooter based on the arcade game. You're a chopper pilot on a surveillance mission in enemy territory; your goal is to make it through the various obstacle courses alive and score as many points as possible. Tall buildings, mountains, narrow tunnels, and various enemies (such as tanks, rockets, mines, and more) can all get in the way and destroy your chopper if you aren't careful. To help defend yourself, the chopper is armed with a machine gun and bombs which can be used to destroy the enemy tanks and rockets. To make the task more difficult, your chopper has a limited amount of fuel. Throughout the landscapes are fuel tanks; if one of these is shot or bombed, you will be awarded extra fuel. As the levels progress, the enemies become more aggressive, fuel becomes more scarce, and the landscape becomes trickier to navigate. - TwinBee (1986): (aka Stinger) Save Professor Cinnamon! When aliens from the planet Attackon kidnap the inventor during their invasion of Earth, two Twinbee Stinger jets (armed with boxing gloves) are unleashed to rescue Cinnamon before the aliens turn the Earth into a giant ball of cotton candy! In this vertical and horizontal scrolling shooter, blast away unusual creatures and even more bizarre bosses, while collecting power-ups and super weapons. By repeatedly shooting bells that come out of the clouds, these bells will change colors, each color giving a different ability. Getting shot down releases a ghost of Stinger, which can be recollected to gain the jet's powers back. In the two-player mode, Twinbee (cyan craft) and Winbee (red craft) have the same speed and they can join "hand-to-hand" and fire a super blast. Also in two player mode, if one craft is hit by the other from behind, it will fire four multi-directional shots. - Gradius 2 (1987): Gradius 2 is a side scrolling shoot 'm up. Shooting enemies will leave a power up pod behind which can be collected to add more power to your space ship. Every level features a wide variety of enemies trying to stop you, with a large boss at the end. Gameplay is for one player or two players alternating. 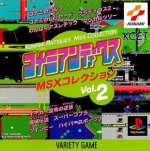 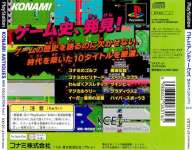