GuitarFreaks (ギターフリークス?) is a music video game series produced by Konami. It is a rhythm game where the player uses a controller to simulate the playing of an electric guitar. The game consists of music predominantly from the rock music, rock and roll and J-pop genres. It is considered one of the most influential video games of all time, for having laid the foundations for popular guitar-based rhythm games, such as the Guitar Hero series.[2] Working Designs attempted to bring Guitar Freaks PlayStation 2 games in the U.S., but patent problems with the guitar controller prevented the project from moving forward.[3] The game is now in its nineteenth version, GuitarFreaks V8, which was released in March 28, 2011. It was speculated to be the final release of GuitarFreaks V. A spin-off series, GuitarFreaks XG was released in Japanese arcades on March 10, 2010,[4] which added two more buttons to the fret bar. A sequel, GuitarFreaks XG2, was released on March 9, 2011. Another sequel, GuitarFreaks XG3, was released on Feb. 23, 2012. 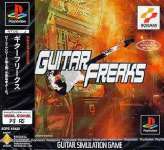