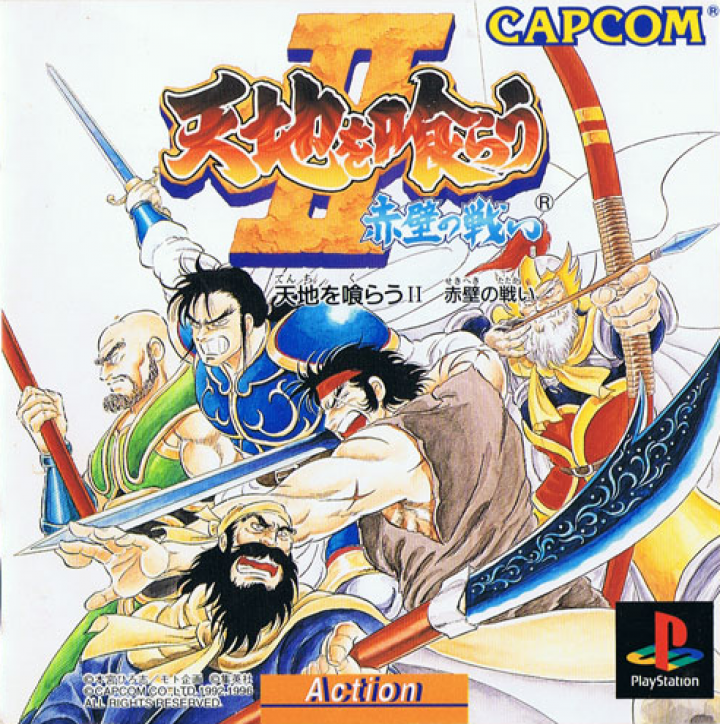 Tenchi o Kurau II: Sekiheki no Tatakai is a side-scrolling beat-'em-up produced by Capcom first released originally as a coin-operated arcade game in 1992 and then later ported over to the PS1. Tenchi o Kurau II: Sekiheki no Tatakai is a beat'em up with 9 stages, in each of which there are large mobs including spearman, archers, strongmen, bomb-wielding opponents, and at least one Wei boss. There can be up to three players on-screen at the same time. Using two buttons, Attack and Jump, the characters all have standard moves typical of Capcom side-scrollers of the day. Common enemies including Wei soldiers such as bandits, privatees, wrestlers, fatties and thieves will keep poping up from everywhere. In the end of each stage there is a Wei general as stage boss. Li Dian, Xiahou Dun, Xu Chu, Zhang Liao, Cao Ren, Xu Huang, the infamous Lu Bu as final boss. After defeating them all, there is also Cao Cao himself who would try to escape. There is also a variety of weapons in the game which can be picked up. As with most side-scrollers, food is used to replenish health and can be found in various breakable containers in the game level. One notable feature of the game is the ability to summon a warhorse which adds more attacks to the characters, generally involving pole-arms (except long bow for Huang Zhong) 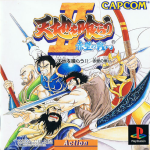 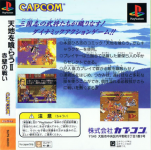 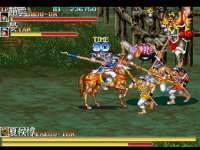 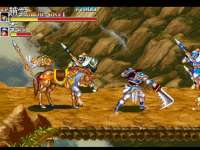