A late-release demo disc given away at Best Buy locations featuring demos of the Greatest Hits versions of PlayStation games. The playable games included Spyro: Year Of The Dragon, Crash Bash, The Legend Of Dragoon, and Gran Turismo 2. A video of Final Fantasy Tactics was also included. 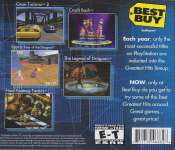 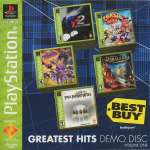