D.N.A.: Dark Native Apostle is a 2001 action-adventure puzzle game developed by Tamsoft and published by Hudson. One of the first games with cel-shading, D.N.A. is inspired by Bomberman, a classic Hudson game series, and American comic books. Trapped in a sprawling facility for genetic experimentation, the protagonist, named only No. 13, struggles to discover his identity and escape. The crux of the game involves navigating the facility and solving the various puzzles gating access. No. 13 drops bombs as his primary attack, but can also wield a variety of weapons, and can equip “biochips” which increase his various abilities. Setting biochips in certain orders enables No. 13 to use special abilities, like briefly dashing or detecting mines. 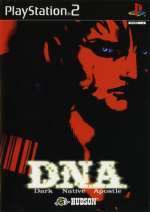