Rayman 3: Hoodlum Havoc is a 3D third-person platform game. Rayman, the main hero, jumps and punches his way through numerous colorful levels, with Globox (and Andre inside him) tagging along and occasionally commenting on the goings-on. Rayman's main weapon is his fist; he can use it to shoot projectiles at the attacking Hoodlums and other foes, and the projectiles are more powerful when the fist is charged by holding down the "shoot" button. The game is divided into several worlds, each divided into a couple of levels; the game is saved automatically after each level. In between the worlds, the player has to complete a mini-game where he has to surf along light-beams in a psychedelic environment. Rayman can also come across power-ups which temporarily give him a special power: the green power-up allows him to shoot tornadoes, the blue power-up gives him the ability to use a grappling hook, the yellow power-up allows him to fly for a short while, the orange power-up allows him to shoot precisely guided missiles and the red power-up grants him a very powerful fist that can bash doors. These power-ups are always necessary to defeat an enemy or a boss, or to get to the next part of the level. 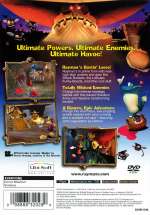 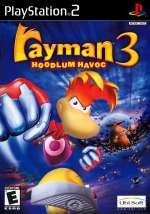 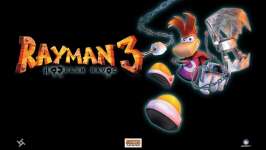