Heavensward focuses on a millennium-long conflict known as the Dragonsong War between the Holy See of Ishgard and the dragon horde of Dravania. Players seek asylum in Ishgard after being falsely accused of murder and become involved in efforts to end the war. These actions uncover an ancient conspiracy concerning the origins of the war. In addition to the new areas, the expansion pack increases the level cap, adds three new character classes and a new playable race, and introduces flying gameplay through the use of airships and other airborne mounts. 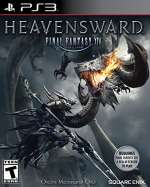