Blue Forest Story is set in a medieval fantasy land, which is controlled by the powerful Empire. There are in fact two stories in the game, featuring two different characters, who live in different provinces of the Empire. The boy Wallace enjoys a peaceful life with his family in a quiet village; the girl Rakjit witnesses persecution and death of her mother, and joins a resistance movement that specializes in magics. The paths of the two young people will eventually lead to the same goal - liberation of the world; but when and how it will be achieved, remains unclear... The game plays for the most part like a traditional Japanese-style top-down RPG. Both Wallace and Rakjit eventually gather a party, which roams the world, visiting various locations and advancing the story in a predominantly linear fashion. Appearance of random enemies triggers a battle screen, which is viewed from an isometric perspective. The battle system is rather old-fashioned, with physical and magical attacks; level progression is automatic, as in most games of the genre. Sometimes the game prompts the player to choose an action or a response; while the flow of the story is rarely influenced by the player's decision, the game keeps track of these decisions, evaluating the player's attitude between chapters. 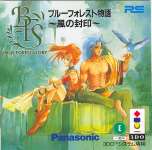 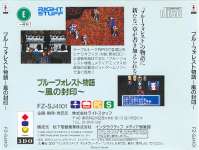