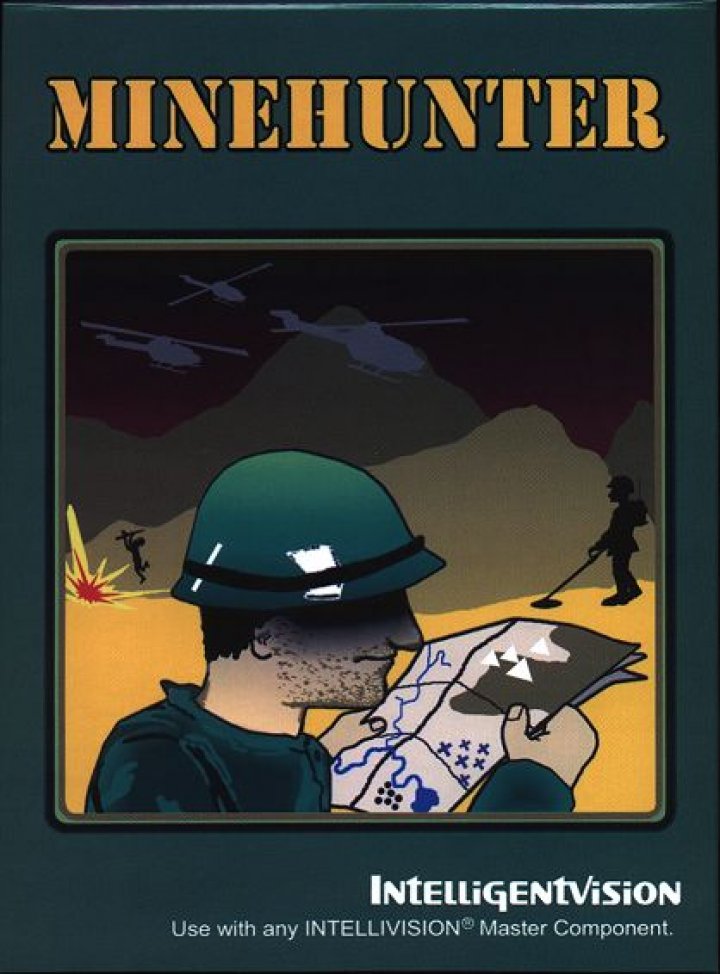 Intellivision Minehunter Take command of the advanced mine scanner aboard your helicopter and begin the hunt for all the mines laid down by the enemy. As you scan the minefield, drones will report back on how many mines are detected in an area. Use these markings to assist in finding all the mines. Hurry, your time is limited! The area that you need to clear of mines is divided into a grid of squares. Several of the squares will have landmines hidden beneath them. The goal of your mission is to identify where all of the landmines are hidden – without actually setting one off. Background: Ryan's father came home one night in 1980 with an Intellivision, Space Battle and Armor Battle. This began his lifelong fascination with video games and computers. Even though the family had an Atari 2600, Ryan and his brothers were drawn to the Intellivision and its more complex games. By 1992, the family Intellivision had long since died, but Ryan started to discover that thrift stores and garage sales were loaded with old video games. For little money, he was able to build what a decade earlier would've been the video game collection of any kid's dreams. Ryan had become an Intellivision fanatic again. As we rolled into the new millennium, the feasibility of programming the Intellivision became possible. A handful of individuals managed to create compilers, emulators, documentation, and development hardware of the Intellivision. Ryan's attention was peaked in 2000 when Joe Zbiciak programmed an entirely new game, 4-Tris, and then managed to build and sell it as a complete package. In 2002 Ryan found a lot of spare time to start dabbling with Intellivision programming. After experimenting with a variety of "Hello World" programs and learning the various features of the Intellivision one by one, Ryan adopted a Minesweeper clone as the theme of his first full game attempt. Ryan chose to do MineHunter for the following reasons: 1) MineHunter is a proven concept. Creating an entirely new game concept is always a risky venture and requires a greater investment of time. (This is why you see so many clones of popular games.) 2) MineHunter is not very difficult to program since it requires little or no animation. (This belief changed when Ryan added the explosion routine.) 3) The game concept had always been a favorite of him. Every time he came across it, he would find himself addicted again. 4) MineHunter is well suited for the Intellivision's display capabilities. MindStrike for the Intellivision ECS proved that it's feasible to make a screen full of numbers look good. The majority of MineHunter was programmed over the course of about 9 months from mid 2002 to early 2003. The game was about 95% finished when suddenly all of Ryan's free time had disappeared. In addition, his interest in programming the Intellivision was starting to wane due to realization that it may be impossible to ever build and sell games. Some brief research showed Ryan that building actual cartridges and producing the associated manuals, boxes, and overlays would be insanely expensive and require an immense amount of time. Ryan's Intellivision programming work was falling farther and farther to the backburner when in late 2003 he was approached by the Chris Neiman and David Harley about the possibility of making MineHunter into an actual cartridge. Over 2003 and 2004 they put a lot of effort, research and investment into working out a plan that would allow for the production of new games to be published just like the originals were 20 years ago. Their efforts encouraged him to complete the programming of MineHunter in 2004. 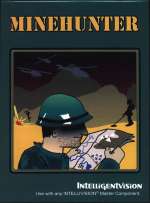