Hostages is an action video game developed by New Frontier and published by Infogrames. It was released for the Acorn Electron, Archimedes, Atari ST, Amiga, Apple IIGS, Amstrad CPC, BBC Micro, Commodore 64, DOS, MSX, NES and ZX Spectrum platforms in 1988. The game was released as Hostage: Rescue Mission in the United States and Operation Jupiter in France; the NES port was titled Rescue: The Embassy Mission. 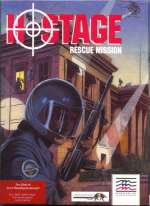