As the title implies, this is a game about breaking into banks, as well as a Break-Out clone. Each level is a bank, consisting of several rooms. You can only leave a room after your ball hits a key. As a burgler, you are symbolised by a pair of eyes, on top of which a paddle rests. Similarly to Woody Pop, parts of the bottom of the screen is covered up, so that you need not guard the ball as much as in other games. Unlike most Break-Out clones, you can move freely over the entire screen so as to hit the ball at the perfect spot. If you miss the ball and it passes through the void at the bottom, it falls back into the earlier rooms, just like in the Amiga classic, Poing. If you catch it there, you can send it back to the room your were in. In the last room of each bank, you should hit the money that is in there, before you hit the square with a calculator, which will calculate your score for that bank. Later vaults feature a bell which must not be hit, or it will wake a guardian that will hunt you across the screen. As in all post-Arkanoids, powerups are available, in the shape of a circle that bounces across the screen, all the while changing colours. Depending on which colour it is when you pick it up with your paddle, you get one bonus out of a range which corresponds to the basics of most games in the genre, such as wider paddle, sticky paddle, multiball and firepower. 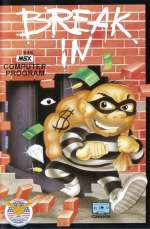