Ninja Princess is an action shooter. You play as a female ninja as you fight your way through hordes of enemies on your quest to recapture territories and to take back the Castle all of which have been captured and occupied by the enemy forces. Throwing knives and shuriken are your weapons as you shoot your way through enemy occupied territory. Coming into contact with any enemies or any of their thrown projectile weapons equals instant death. Unlike the original arcade machine, the SG-1000 and MSX ports contain only 13 levels instead of 16. 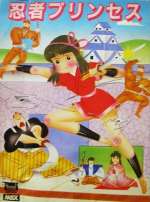