As the name implies, Robo Wres 2001 is a game about robots that wrestle in (what then was) the future. Six robots from six countries fight in a tournament that, apart from the robot element, is closer to American, Mexican or Japanese wrestling than the classic kind of wrestling. Each player uses three keys or buttons to execute various attacks in the classic "button masher" beat'em'up manner, with different button combinations triggering different techniques according to the proximity between the combatants. Each robot has its own arsenal of special moves. The ring is viewed from an elevated position and allows movement in two dimensions. The losing robot is turned into scrap ready for recycling, with the winner going on the next round. 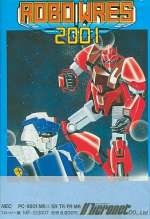