500cc Grand Prix was one of the first French-made games for the Atari ST. It was developed by Microïds in 1987. The graphics and animation were not well developed in this motorcycle Racing game but on the other hand the fact that the game has a versus mode is well-appreciated. The game provides a two-player mode simultaneously and three levels of general difficulty. In a single Grand Prix there are 12 available circuits, inspired by real circuits. The DOS and Atari ST version include a save mode after every race. Each race has 9 laps, with six racers. In training mode, there are two racing tracks only 2 racers. During the races, the screen is always divided veritcally into two, which shows the point of view of two racers. When playing in single, the other racer is one of those controlled by the computer and it is possible to choose which side to play. The view in each half shows the racer in third person and the motorbike control panel. 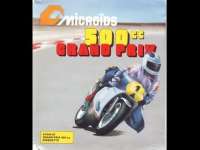