Fire Pro Wrestling 2 features detailed action and more than 200 wrestlers from which to choose, as well as the ability to create and store wrestlers of your own. It also allows you to connect up to four Game Boy Advances and take on, team up, or trade wrestlers. You can customize every detail of a wrestler's appearance and use more than 1,200 fighting techniques in several modes, including Normal, Deathmatch, Gruesome, and Battle Royal. The game also includes a practice dojo in which you can practice your standing move, grab move, running move, and your move against a downed opponent. 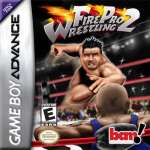