Put your athletic skills to the test with Hamtaro and his Ham-Ham pals as they compete in the 2004 Ham-Ham Games. You must guide different Ham-Hams to victory in 15 sporting events; including archery, sprinting, sailing, swimming, and more. Root for your favorite Hamtaro characters as they go head-to-head with new Ham-Hams, such as the pirates of Team Seaham. Also, with the Game Boy Advance Game Link Cable, you can trade statistics and collectible costumes with your friends. 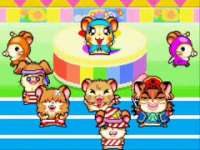