Monster capture/battle sequel. Like the previous game, Keitai Denjuu Telefang 2 comes in Power and Speed varieties. In this incarnation, players take control of a young man named Kyou, who is trapped in the Denjuu World when a sinister Denjuu called Diablos destroys all but one of the Antenna Trees, which are the conduit between the human world and the Denjuu World. Kyou must raise his Denjuu partners and prevent Diablos from destroying the last Antenna Tree. 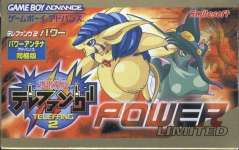