This the story of a young man or young woman who becomes a Police Officer in the Hoenn region. WARNING: There's a lot of violence, death and stuff described/depicted in this game. If you're uncomfortable with it that, than this game probably isn't for you. 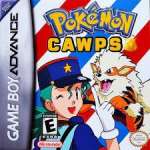