-Build your Medabots for battle with hundreds of different combat parts -Collect and trade Medabot parts, with many exclusive to the different versions of the game -Fight other GBA players in 2-player Medabot battles Part platformer, part fighting game, part pocket monster battler -- Medabot AX games (released in Metabee and Rokusho versions, nearly identical except for the starting bots and different weapons/items you can win and trade between the two different editons) has what could have been a lethal combo. The game is based on a frenzied Japanese TV series about kids who build robots and fight them against other kids' robots. It dispenses with the negligible story of the series in favor of the player just going in and kicking ro-butt over and over again against a series of faceless and recognizable foes. 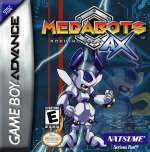 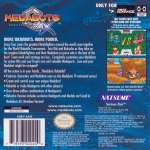