Acrobat Mission is a vertically scrolling shoot 'em up arcade game released by UPL in 1991, licensed to Taito for manufacture and distribution. It was ported to Nintendo Super Famicom in 1992. In the year 2100, the Earth's environment is devastated by its inhabitants, who develop their space technology to live on Mars. Before they left, the humans created a Bio-Computer assigned to replenish Earth's ecosystem in hopes of returning to Earth. 50 years after terra-forming parts of Mars, the human colonists were attacked by mysterious, but hostile UFOs. The military leaders among the colonists set up an attack force to defend the colonists using state of the art fighter ships identified as the Icarus. The main operation of attack is called "Acrobat Mission" because it exceeds the technical flying ability of the pilots. In the arcade version, surviving fighter pilots Jet and Nova are available for the player to choose for the rest of the game, but both were discluded from the Super Famicom port, making the player's pilot anonymous as well as discarding Nova's custom color scheme. Here however is the story, exactly as it appears at the beginning of the game, with spelling and grammar mistakes preserved: "AD 2100: HUMANS EXTERMINATED BY THEIR OWN NATURE DISTRUPTION AND ESCAPE TO MARS LEAVING BIO-COMPUTER FOR ENVIRONMENTAL RECUPERATION OF EARTH. ONE DAY HALF A CENTURY AFTER HUMANS ARRIVED, MARS WAS ATTACKED BY STRANGE FLYING OBJECTES. TO FIGHT THESE ENEMIES, THE DIRECTOR-GENERAL OF THE DEFENCE AGENCY ORGANIZED THE TASK FORCE ARMY AND STARTED THE DOG FIGHT WITH INVADERS QUICLY. THE OPERATION WAS CALLED "ACROBAT MISSION" AS IT EXCEEDED THE PILOT'S TECHNICAL LIMIT." Players started the game equipped with the default weapon, the Standard Shot: a semi-automatic laser weapon. Though moderately powerful, the Standard Shot cannot be upgraded or charged. Once the player has lost a significant number of lives and their selected weapon his lost its upgrades, the Standard Shot will once again take over. Two other weapons are selectable to the player, one of which is the Wave Shot (announced as Wide in the Arcade version). The Wave Shot is a spread shot that increases in size, numbers and strength. When charged, the Wave Shot can unleash a short range, but powerful laser blast that increases in width and strength when Wave icons are collected. The other weapon was the Hurricane Shot, a unique area-effect weapon that encircles the ship clockwise when fired before flying forward. When charged, the Hurricane Shot fires a ball of energy across the screen, but there is a one second delay every time the shot is fired. The player also had Bombs although unlike many shooters, the player can only hold up to two bombs. Once collected however, the two bombs get physically mounted under the ship's wings. If an enemy shot hits one of the bombs, then the bomb will detonate, creating a destructive shield for the player. The player can manually detonate either bomb at will. The player's Icarus fighter ship has a number of defenses at its disposal as well. Whenever the player moves their ship in any given direction, a burst of flame from the ship's jet exhaust will shoot out from the opposite direction the player moves the ship in. This applies to all directions: left, right, front, back and all four diagonal angles. This jet exhaust not only serves an aesthetic purpose, but it can also harm nearby enemies and destroy nearby objects. Whenever the player is hit, their ship will steer wildly out of control. Once this happens, a timer will appear near the ship which indicates how long the ship has until it explodes. The explosion of the player's ship will harm any nearby enemies. Also, because the Icarus is apparently well built, any kamikaze enemies or drifting objects that touch it will not damage or destroy the player's ship, allowing the player less restrictive movement. 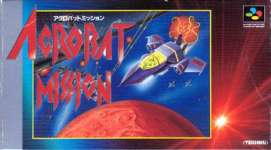 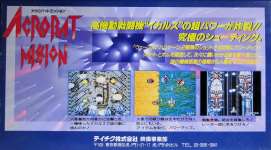 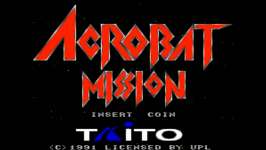 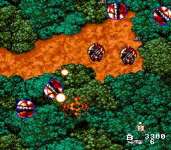 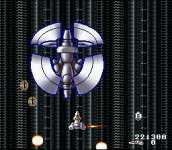 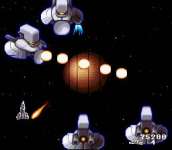 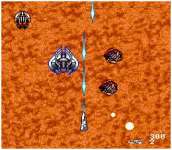 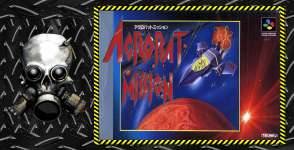 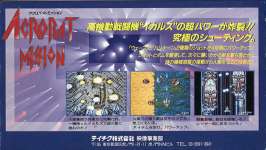