Little Master: Nijiiro no Maseki ("Little Master: Jewels of the Rainbow") is a strategy RPG for the Super Famicom and the third game in the series. The first two games, Little Master Raikubaan no Densetsu and Little Master 2: Kaminari Hikari no Kishi, were exclusive to the Game Boy. Set two years after the events of Little Master 2, the heroes - swordsman Riim, minotaur brawler Mormor and healing mage Tamtam - rescue a goatman from a cave-in, which sets off another series of battles against old foes the Skull Bombers and other villains. The game is structurally similar to Intelligent Systems's Fire Emblem or Camelot's Shining Force series: players move characters around a grid, fighting enemies in range via cutaways that shows the two characters exchanging blows on a 2D plane. Players need to be wary of counterattacks from enemies and getting surrounded by enemy units on the tactical map, as both might lead to an allied character getting eliminated from battle. The player can also investigate houses on the battle map to potentially earn items and recruit new characters. The offers two difficulties: Normal and Advanced. The main difference is that experience gain is a lot slower on Advanced, forcing the player to consider how to spread around the finite amount of experience between their units. The game was not officially localized, but a few partial fan translations exist. 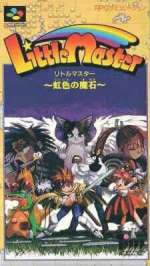