Go Go Ackman 3 is the third and final Super Famicom video game adaptation of Akira Toriyama's manga about the 200 year old "devil child" Ackman and his culling of human souls on Earth. On hand to stop him from hurting humans, though he rarely succeeds in doing so, is the cherubic angel Tenshi. The third game has the pair teaming up to take on Tenshi's flamboyant rival, who employs an army of mechanized angels in order to complete Tenshi's job in taking down Ackman after kicking the cherub to the curb. Tenshi is now a selectable character that the player can switch between at any point. As with the two previous games, Go Go Ackman 3 is a side-scrolling platformer that offers a number of different weapons Ackman can use to destroy the angelic hordes on his tail. 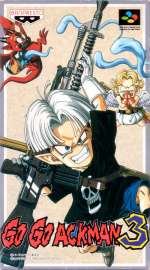