Released just 5 weeks after "Final Bout" and due to difficulty criticism, Human's "Easy Type" sadly removed the Wrestler Edit feature altogether but did bring the 8 legendary wrestler unlocked from the start. The timing on the grapples was far more forgiving, make the game much easier to play against the CPU. A curious update but there is a lack of the Wrestler Edit mode. 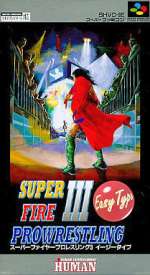