This is a baseball game featuring 12 fictional teams, plus the player can also create 2 custom teams. Game modes include an Exhibition mode, an All Star game, a Pennant Race, and a Watch mode. While Exhibition mode can be either a one or two player affair, the All Star game is strictly for two players to compete in. When playing, batting and pitching are both done from a behind the batter viewpoint. The pennant race involves 6 teams playing each other throughout a season consisting of a number of games chosen by the player. Watch mode lets the player watch two computer controlled teams play each other. Options include either having automatic or manual fielding, having errors and/or wind on or off, and being able to either skip or watch opponents pennant games. There is also the Cold Game option, which lets a baseball game end when a team is winning by the chosen amount of runs. 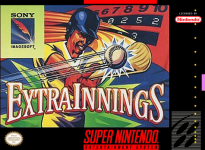