Human Grand Prix IV: F1 Dream Battle is a Formula 1 licensed game from Human Entertainment and the fourth game in their Human Grand Prix/F1 Pole Position series. It would be the last Human Grand Prix game to be released on Super Famicom: the fifth and final game in the series, F1 Pole Position 64, was instead a 1997 N64 game. Similar to the third game in the franchise, this game never saw release outside of Japan but did have all in game text in English. It also features the real teams and drivers of the 1995 F1 season, as well as a number of the official F1 courses. 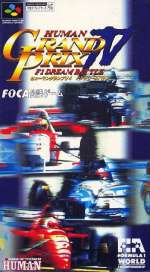