Ranma ½: Akanekodan Teki Hihou is a Japanese role playing game for the Super Nintendo Entertainment System. It was the third Ranma ½ game released in 1993 as well as the third game overall for the SNES. Its title alternatively translates into "Ranma ½: Treasure of the Crimson Cat Gang" or "Ranma ½: Treasure of the Red Cat Gang". Of the two, the latter translation is typically regarded as the official one. While coming home late one night, the Jusenkyo Guide accidentally wanders into the Gods and Demons Graveyard, and proceeds to knock over the tomb of the dreaded Nekomaou, the Ghost Cat King. The evil spirit, returned from the grave, gathers to him the titular Red Cat Gang and sets out to gather three treasures, the Peach Gem, Sakura Sword and Forest Mirror, in order to recreate the magical Star Crystal and attain his wish of world domination. Ranma Saotome and several of his friends set out to stop this evil from occuring.Ranma Saotome is the main character and can never leave the party. Thusly, he is present throughout the entire game. Ranma's primary goal is to obtain the Star Crystal for himself and use it to wish away his Jusenkyo curse. His secondary objective is to prevent the rebirth of the Ghost Cat King - as Akane notes, he in particular will suffer if felines become the dominant species. His final objective is retrieving his father from the clutches of the Akanekodan. 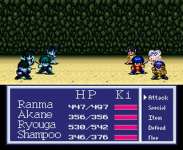