Eggerland: Meikyū no Fukkatsu (エッガーランド 迷宮の復活 Eggerland: Revival of the Labyrinth?) is a puzzle video game developed by HAL Laboratory for the Family Computer. It was released in 1988 in Japan as the fourth game in the Eggerland series following Eggerland Mystery, and is the third in the series not counting the port of Eggerland 2 made for the Famicom Disk System. The game contains roughly 162 stages (or maps), which are arranged on an 8-by-16 grid (with some stages hidden). 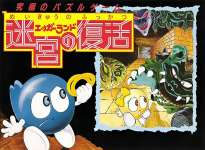